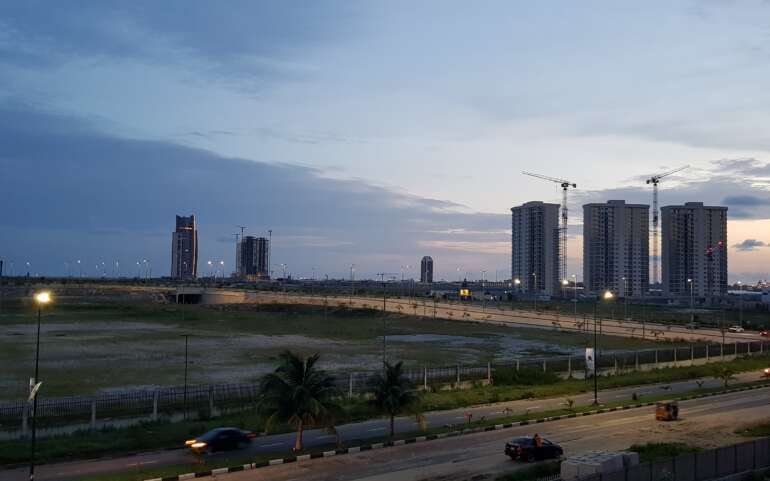 The Speaker was Mr. Gbolahan Taiwo, Regional Economist–West Africa, Stanbic IBTC Bank. Impact on Nigeria has been multi-faceted. Manufactured goods constitute the largest competent imports. Nigeria has a comparative advantage on some goods.

The session was anchored by Mr. Foluso Phillips, the Chairman of the NSACC. He mentioned that FDI/Private sector investment has been very low in the last 4-years. There was fiscal pressure, access to foreign direct investment amid some broader constraints restricting trade and investments.

The issue of Corruption, bureaucracy, lack of clear fiscal and monetary policies, infrastructural constraints, and specific sectoral concerns from investors such as Banking, Oil and Gas, Power, and Consumer.

He said that the year 2020 has not been fully eventful the world over for governments, businesses, and livelihoods particularly with the coronavirus (COVID-19) which has continued to ravage the global economy leading to shocks and recession.

The Covid-19 recession is a major ongoing global economic crisis and many countries (advanced and emerging) have been impacted.

According to reliable data, leading economies like the UK, France, Italy, Belgium, Canada, Germany, Denmark, Spain, Russia, the US, and Japan as well as emerging economies, have all suffered a devastating economic decline which has left them recessed as a direct result of the pandemic.

However, the UK’s recession is by far the worst of any of the world’s major economies even though France and Germany are almost out of recession.

In comparison, the UK had a 20 percent downturn in GDP throughout the first quarter which is the worst since records began in 1955.

Significantly, so far, the COVID-19 pandemic has had far-reaching consequences more on the emerging economies, particularly African countries.

The World Bank predicted that overall sub-Saharan Africa’s economy would shrink by 2.1 percent to ⁠5.1 percent during 2020.

According to Taiwo the key reforms/Policies to encourage trade and investment in Nigeria are infrastructural development; custom/port reforms and modernization. Egypt has enjoyed sustained FDI inflows in the past few years.

Also, he mentioned that Nigeria should not be a dumping ground for goods and the country should improve its production capacity in the country. CBN has this backward integration. The majority of the States are not pulling their weights, not generating their IGR.

Self-sustaining advantage, every state has some resources which they need to develop.

Drastically reducing cost, and this is an avenue to create jobs. Lagos has grown its IGR over over 18 months.

In the same vein, Nigeria’s economy has officially nose-dived into a recession for the second time in the last five years. However, the impact has been visible even before the official pronouncement, with the increase in the inflationary levels and rise in food insecurity, including deficit in health care, education, among others in the country.

Unfortunately, these shortfalls are likely to surge concurrently with a spike in the prevalence rate of crimes and criminality, especially if measures are not drastically taken to forestall a reversal of the trend.

The recession might worsen the already alarming poverty and unemployment rates in the country and could lead to an economic depression if the attendant negative implications are not addressed with holistic government policies, spending, and economic stimulus packages.

Agreeably, a recessed economy comes with a contraction of the Gross Domestic Product (GDP) growth for at least two consecutive quarters and this was unavoidable because the Nigerian economy has been somewhat pressured from March 2020 as a result of the novel coronavirus and the attendant consequences particularly the lockdown and border closures.

According to the Nigerian Bureau of Statistics (NBS) report, the first quarter of the year 2020 showed a slow-paced growth of 0.68 percent as GDP contracted by 1.87 percent when compared to the fourth quarter of 2019.

However, the economy shrank in the second quarter of the year as the GDP fell by 6.10 percent, compared with the growth of 1.87 percent in Q1.

The NBS released the latest GDP numbers and it showed that the nation’s economy recorded a contraction of 3.62 percent in the third quarter of 2020.

Despite the contraction witnessed so far in the year, commendation needs to go to the government for being able to close the contraction gap from 6.10 percent to 3.62 percent within just a quarter, it gives a glimmer of hope.

Even though the contraction and slide into recession was a long-awaited reality considering the quivering economy and the multi-impact of the novel coronavirus pandemic, which includes a significant downturn in consumer activity, food insecurity, low disposable income, weak consumer spending, inflation, high unemployment, a decline in crude oil demand and drop in price, shrinking government revenue, forex volatility, and the general lull in business and economy activities in the country among others.

Already, the COVID-19 pandemic is life-threatening and a huge health risk, however, the socio-economic impact has been devastating, with many workers facing job losses, job cuts, salary cuts, and redundancy.

This coupled with the recession, it is evident that businesses, particularly SMEs, will struggle and many Nigerians will more than likely slip further below the poverty line as the majority are in the informal business sector.

In my view, negative GDP growths and decline in economic activities have been a global issue due to the pandemic, however, as a nation, the over-reliance on importation and its value chain has grossly contributed to the current realities in the country.

This portends a stiff climate for businesses, households, and livelihoods. However, the government can encourage consumer spending with policy responses and also stimulate investments particularly foreign direct investments and inflow of strategic funds for infrastructure investment and development to assist in the reversal of the trend.

As a people, we must invest in capital expenditure expenses and strategic infrastructure to reflate the economy.

More so, to cushion the effect of the impact of the recession, harmonization of both fiscal and monetary policy is essential. The economic stimulatory measures targeted at taxpayers to save their businesses from collapse should be strengthened by the government.

Perhaps, the government might need to consider more pragmatic palliatives such as social and fiscal policy palliatives, concessions on import trades, duties, and port charges waiver to reduce the value chain disruption.

At this time, cutting taxes to increase and improve disposable income needs to be considered. From observation, most SMEs run their businesses on loan facilities and the current situation will impede on their capacity to service these loans effectively, so government intervention is required to forestall massive business shut down.

Further to this, to assist and support these real sectors and businesses at this time, regulators and tax authorities can also come up with critical policy actions and economic palliatives to keep businesses in operation.

The point of note is that if these efforts are not rightly channeled, we might be heading for a long haul which might be depressing.

Food prices remain a major driver of inflation in Nigeria especially with the rise in the composite food index. Consequently, priority attention and adequate policy response by the CBN monetary policy committee are required to address and stem the growing inflationary trend.

Nigeria derives close to 85 percent of its foreign revenue from crude oil exports according to data from the Federal Ministry of Finance.

As a result of the price shocks occasioned by COVID-19, crude oil receipts have gone down and are no longer able to sustain the economy. Therefore, a thorough expansion of the revenue base is crucial at this time.

As a nation, we can leverage and emulate the United Arab Emirates which diversified its economy by reducing dependence on oil receipts from 100 percent to only 35 percent by considering investments and expansion of its non-oil sector- particularly service, tourism, real estate, and smart industries.

In Nigeria, some sectors can be considered to diversify our revenue base, they include – agriculture, transportation, information technology, and digital economy, If put in place it will reduce millions of dollars if not billions spent yearly on importing basic goods and food commodities that can grow locally.

Further attention should equally be given to our trade policy and SMEs which are the bloodline of most economies.

Having and strengthening a strong trade policy will help create millions of jobs, grow local industries, and expand the economy.

In simple terms, it will help with the industrialization of the country and rejigging the economy in the long term. Though the ease of doing business initiative is essential, the rule of law and efficient legal and regulatory system is also required for simple contractual disputes to be resolved.

Investors, both local and international, will not likely consider investing in a country where simple contractual disputes take between 2 to 15 years to resolve.

In conclusion, the anti-corruption drive of the government needs to be stiffened, so that all social intervention, strategic plans, policies, and economic stimulus packages can be managed judicially.

CONSUMER MARKETING IN THE NEW WORLD

SECURITY CHALLENGES IN NIGERIA AND THE IMPLICATIONS